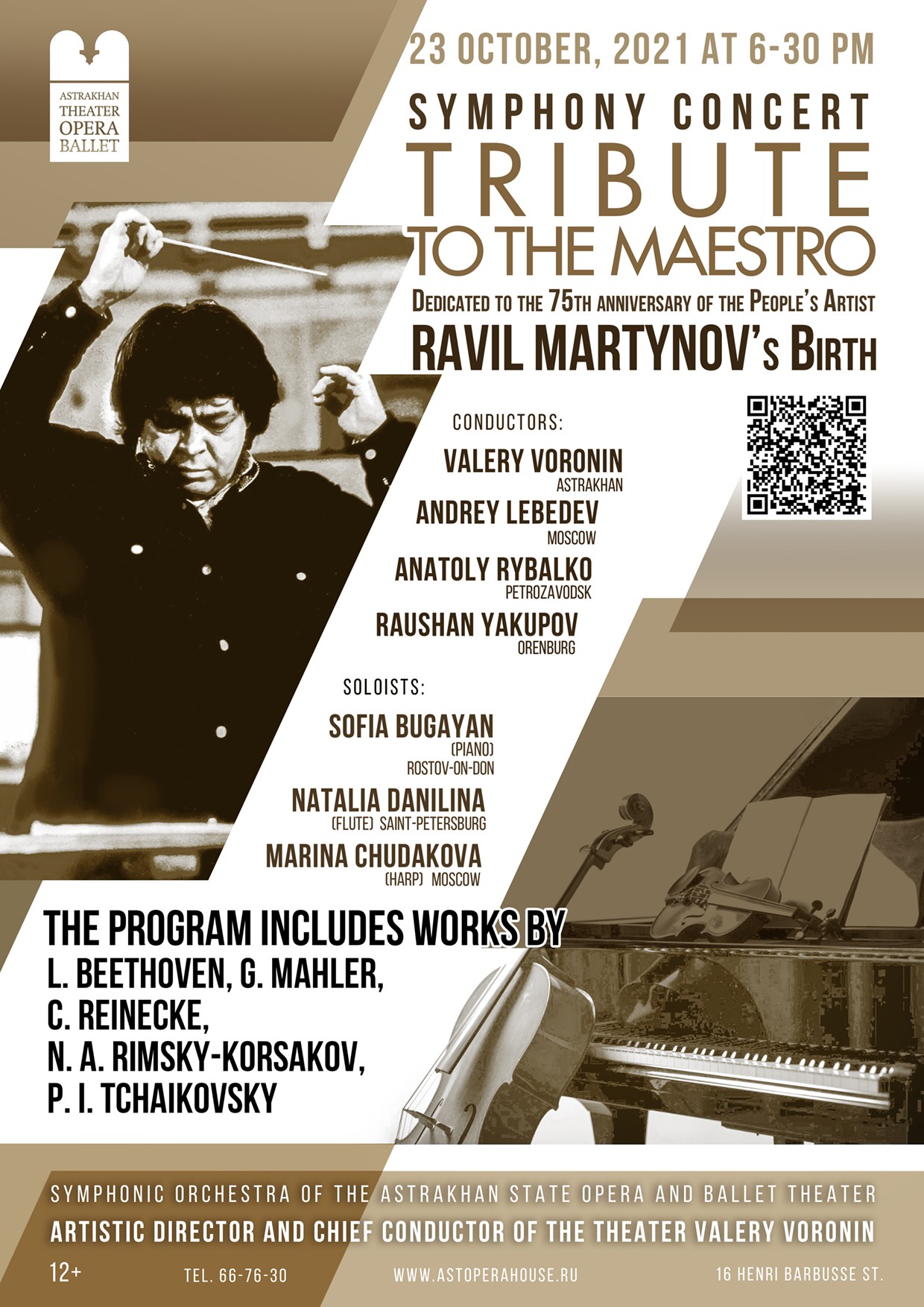 The symphony concert "Tribute to the Maestro"

The symphony concert "Tribute to the Maestro" dedicated to the 75th anniversary of the birth of the People's Artist of Russia Ravil Martynov.

"I am an unhappy person. I can’t do anything. That's just the music..."

Ravil Enverovich Martynov, an outstanding conductor, a prominent representative of the Saint Petersburg Conducting School, would have turned 75 on June 16, 2021.

As initiated by the artistic director and chief conductor of the Astrakhan Opera and Ballet Theater Valery Voronin, who was the graduate of Professor Ravil Martynov’s class, a symphony concert dedicated to the maestro-intellectual, who loved music most in life, will take place. The follower of Evgeny Mravinsky, Leo Ginzburg, Kirill Kondrashin and Ilya Musin, he always searched for the "spirit of works" in music. Once he said: "I absolutely can’t do anything in this life, I can only be a musician."

Valery Voronin recollected, “Everyone realized the scale of his talent, the musical awareness that he conveyed to us, his students. For me, even today Martynov is the conductor, who is the master of the multifaceted musical art ranging from the works of Beethoven and Mahler to the compositions of Schnittke and Hindemith. His conducting style is laconic; every orchestra player is bent to his will. Even today I recall his advice every time I go out to the orchestra, “You should never work for show. You should never impose anything on the orchestra - it's easier to be convincing in your requirements."

The best musicians of the country, including Mikhail Gantvarg, Mikhail Lidsky, Alexander Rudin, Alexander Trostyansky and many others, performed a great number of instrumental concerts with Ravil Martynov. On that evening Valery Voronin, Anatoly Rybalko, Raushan Yakupov and Andrey Lebedev will come to the conductor's desk. As soloists the following musicians will perform: Marina Chudakova (harp), Sofya Bugayan (piano) and Alexander Rudin (cello). The concert program will include works by Ravil Martynov’s favorite composers. The decades of the life of the country’s best orchestras can be easily called an era, whose name is Ravil Martynov.

To attend the theater, it is required to have a negative PCR test, the QR-code, confirming vaccination, or other proof of recovery from Coronavirus disease.