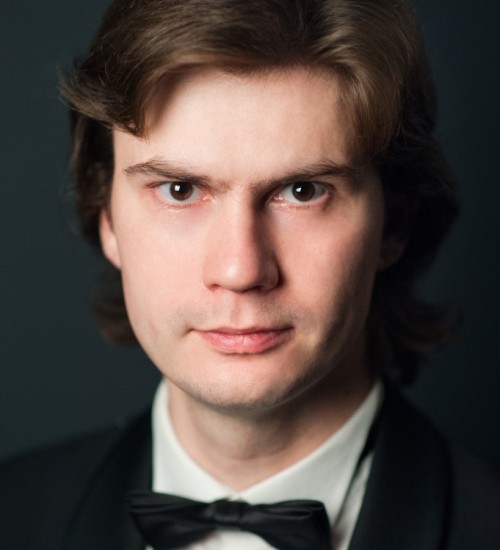 He graduated from the conductor faculty of the National Music Academy of the Ukraine named after P.I. Tchaikovsky in 2006 and the vocal faculty of the Academy (class of Professor B.F.Gnydya and Professor A.Yu.Mokrenko) in 2009. After graduation, he continued his studies in vocal art under the guidance of T.S. Kalustyan.
In 2006 - 2009 he took part in the performances of the opera studio of the National Academy of Music, in the performances of the National Opera of the Ukraine named after Taras Shevchenko (Kiev), of the Mariinsky Theatre (St. Petersburg). He toured Spain, France, Belgium, Denmark.
Since 2011 he has been a soloist of the Astrakhan State Music Theatre - the Opera and Ballet Theatre.

2012 - Moscow, Stavropol, Essentuki, Kislovodsk, Nalchik, Vladikavkaz, Elista.
He has toured in Spain, France, Belgium, Denmark, Italy, England.
In 2016 he performed at the Mariinsky Theatre (St. Petersburg ), Andrei Bolkonsky in the premiere of S. Prokofiev's opera "War and Peace" ( semi-staged performance) under the baton of Valery Gergiev. Just within XXIV Music Festival "Stars of the White Nights ", he performed the roles of Andrei Bolkonsky and Onegin.
Since 2016 is the guest soloist of the State Academic Mariinsky Theatre.

Onegin - "Eugene Onegin" by Tchaikovsky
Figaro - "The Barber of Seville" by G. Rossini
Silvio - "Pagliacci" by R.Leonkavallo
Sharpless, Yamadori - "Madame Butterfly," by Puccini
Marcel, Schaunard - "La Boheme" by Puccini
Eletsky - "The Queen of Spades" by Tchaikovsky
The demon from hell - "Cherevichki or The Night Before Christmas" by Tchaikovsky
Rangoni - "Boris Godunov" by Mussorgsky