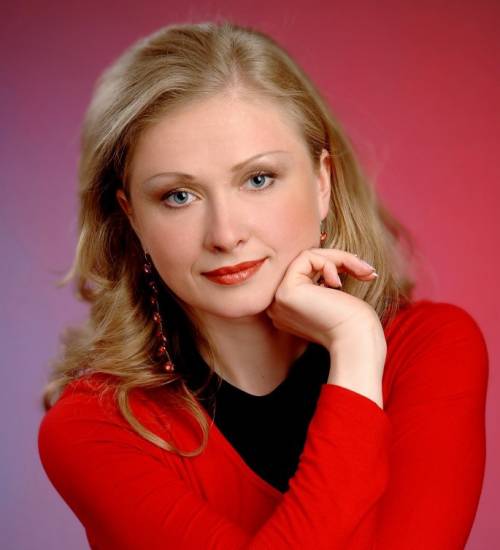 She graduated from the Rostov State Conservatory (Academy) named after S. V. Rachmaninoff ( class of Honored Artist of the Republic of Kazakhstan M. N. Hudoverdova) in 2006.

2012 – Moscow, with the Astrakhan State Opera and Ballet Theater.

Maria - "The Queen of Spades" by P. Tchaikovsky
Mercedes – "Carmen" by G. Bizet
Kat – "Madame Butterfly" by G.Puccini
Fiordiligi – "Women are like That" by W. A. Mozart
Anna – "Merry Wives of Windsor",by O. Nicolai
Silva – "Silva" by I. Kalman
Nastya – "Womanish Revolt" by E. Ptichkin
Katty - "How to Get my Husband back" by V. Ilyin and V. Lukashov
Oksana - "Cherevichki, or the Night before Christmas" by P. Tchaikovsky
Desdemona - "Othello" by G. Verdi.
Rosalind - "die Fledermaus" by I. Strauss
In 2012 she performed the part of Kate Pinkerton in "Madame Butterfly" by G.Puccini at the festival "The Golden Mask" in the Bolshoi Theatre (Moscow).
In 2015 she performed the part of Larina in "Eugene Onegin" by P. Tchaikovsky at the festival "The Golden Mask" in the Musical Theater named after K. S. Stanislavsky and V.I. Nemirovich-Danchenko (Moscow).