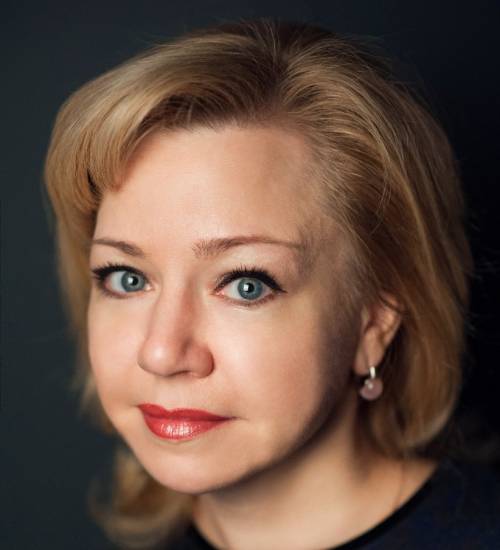 She graduated from the Astrakhan State Conservatory ( class of People's Artist of Russia, Professor N. K.Tarasova) in 2000.
In 2006 she graduated from the post-graduate course of the Astrakhan State Conservatory (class of People's Artist of Tatarstan, Honored Artist of Russia, Professor E.A.Mihaylova).
2004 - a winner of the IV All-Russian competition of romances (Vladimir).
2005 - a winner of the VI International Chamber Singing Competition (Estonia, Tallinn).
2007 - she was awarded a diploma and a prize of the Astrakhan region governor`s award in Vocal Arts named after Mary Maksakova for the high mastery.
She was a constant participant of the annual festival named after Safonov in Kislovodsk.
Since 2004 she worked as a soloist of the Stavropol State Philharmonic Society, a soloist of the chamber orchestra "Cantabile", of the trio "Elegy", she taught in the Stavropol College of Art. She was often engaged to perform Gilda ("Rigoletto"), Marfa ("Tsar's Bride") in the Astrakhan State Music Theatre and participated in large concert programs of the theatre.
She toured with solo concert programs in Sochi, Vladikavkaz, Volgograd, Makhachkala, Saratov, etc.
Since 2012 she has been a soloist of the Astrakhan State Opera and Ballet Theatre.