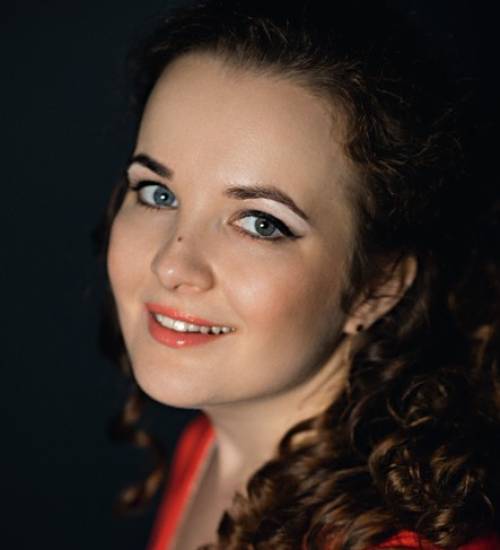 She graduated from the Musical school in piano, vocal and composition with honours. At the age of 10 she got a Governor's scholarship for "Young talents of the Moscow district". She repeatedly became the winner of various competitions sill at school.
In 2015 she graduated from the Gnesins` Academy ( class of Professor N. N. Salnikova and Professor V. A. Malchenko). She was a participant of master classes of Professor Arthur B. Makela, Director M. Cichocki (Poland), Professor Nicholas Sears (UK), Professor T. Sinyavskaya and M. Khudoley. She was improving skills under the guidance of People's Artist of Russia O. Terushnova.
She is a laureate of international vocal competitions in Poland, Lithuania (the1st prize), the all-Russian Competition named efter A. Dargomyzhsky (1st prize), a winner of competitions in Moscow and St. Petersburg. I. Bokareva was granted the right to perform the Countess in Mozart's "Le Nozze di Figaro" at the international festival "Ars music" in Poland as the winner of the competition for the best performance of an Opera part.
She performed the part of Tatyana (Tchaikovsky's "Eugene Onegin") in the Studio-theatre Gnesins` Academy of music in 2014-2015.
She performed the part of Merlin (Cimarosa`s "Impresario in Difficulties" in the theatre "Open Stage" (Moscow) in 2010-2012.
She toured Poland, Belarus, Lithuania, Russia,she participated in programs of Charitable foundations "Bel Canto", in the Culture revival foundation by People's Artist of Russia Vladimir Matorin, in Easter festivals. She participated in recording a CD with a clergy chorus of the Moscow diocese.
2015 – a soloist of the Astrakhan State Opera and Ballet Theatre.