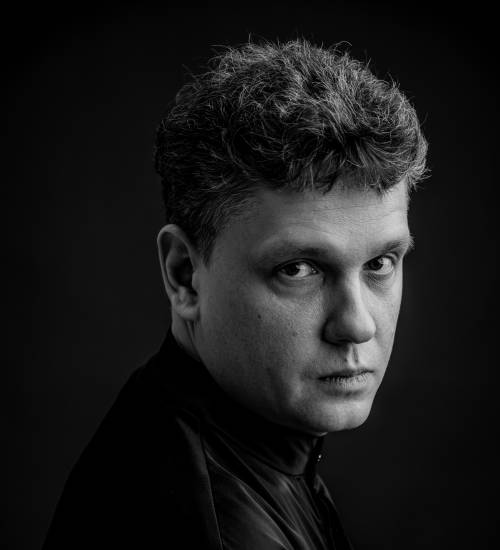 Honored Artist of the Republic of North Ossetia - Alania

Kirillov Evgeny Vladimirovich was born in Gorky (Nizhny Novgorod). In 1985 he entered the Gorky Сhoral Chapel of Boys (under the guidance of the People's Artist of the Russian Federation, Professor L.K. Sivukhin). After graduating with honors from the chapel in 1995, and then from the Nizhny Novgorod Choral College, in 1998 he entered M.I. Glinka Nizhny Novgorod State Conservatory where he studied in the class of the Honored Art Worker of the Russian Federation, Professor M.A. Samorukova.

He graduated with honors from the Conducting and Choral Faculty in 2002, and from the Opera and Symphony Conducting Faculty (the class of the People's Artist of the Russian Federation, Professor A.M. Skulsky) in 2004. He completed his postgraduate studies at the Nizhny Novgorod Conservatory (under the guidance of the Honored Art Worker of the Russian Federation, Academician E.B. Fertelmeister).

From 2002 to 2008 he was a senior lecturer at M.I. Glinka Nizhny Novgorod State Conservatory (Academy) at the Opera and Symphony Conducting Faculty, the Сhoral Сonducting Faculty, and at the Composition and Musicology Faculty.

From 2004 to 2005 he was the Artistic director and Chief Conductor of the Pacific Symphony Orchestra of the Primorye Regional Philharmonic of Vladivostok. In 2004 he participated in the master classes given by Kurt Masur (Germany) in Wroclaw (Poland).

From 2006 to 2008 he was the conductor of the Nizhny Novgorod Gubernsky orchestra, which under his leadership in 2007 was awarded Grand Prix at the International Brass Orchestras Competition in Volgograd; and also performed with much success at International festivals in Tunisia and Italy.

In 2008, he became the conductor of the Perm State Opera and Ballet Theatre named after P.I. Tchaikovsky. He has been the conductor and musical director of the following theatrical productions: “The Barber of Seville” by G. Rossini, “The Ghosts of Christmas” (the world premiere, music by Dmitry Batin), “The Broken Cup, or How to Become a Husband and Survive” (“Rita” by G. Donizetti), “The Bell, or How to Get Married Properly” (by G. Donizetti), “The Malachite Box” (the world premiere by Dmitry Batin)

In 2011 he was appointed the Chief Conductor of the National State Opera and Ballet Theater of the Republic of North Ossetia-Alania (the Artistic Director is L. Gergieva; in 2017 it became a branch of the State Academic Mariinsky Theatre).

In 2013 he was awarded the honorary title "The Honored Artist of the Republic of North Ossetia-Alania".

In 2018 he became the Conductor of the Astrakhan State Opera and Ballet Theatre.

Since September 2022 he has been combining the positions of the Conductor and the Acting Chief Choirmaster.