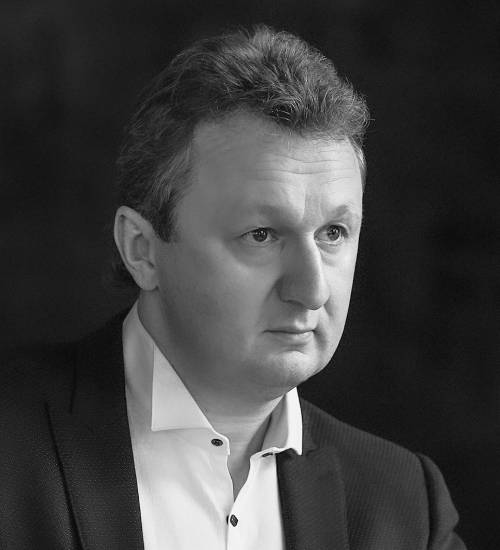 He was born in Leningrad. He graduated from the St. Petersburg State Conservatory named after N. Rimsky-Korsakov, the faculty of choral and opera-symphonic conducting (the class of Professor Martynov R E, the People's Artist of Russia).

He began his creative activity in 2002 as a guest conductor at the St. Petersburg State Academic Symphony Orchestra.

In 2005 Voronin was invited to the Rostov State Musical Theater, and in 2007 he was appointed chief conductor of the theater.

In Rostov V.V. Voronin made a number of premieres (The Magic Flute by V.A. Mozart, Carmen by G. Bizet, Prince Igor by A.P. Borodin, Unona and Avos by A. Rybnikova),  two of which were nominated for the National Theater Prize "Golden Mask" ("Best Conductor's Work").

Being chief conductor of the Rostov State Musical Theater, Voronin went on tour with the troupe to Finland, Poland, Spain and Portugal promoting the Russian opera and ballet schools.

Starting the reorganization of the theater, Valeriy Voronin, first of all, carefully formed the new group of the artistic leadership, skillfully rallied a team of like-minded people who shared his high professional requirements and took the theater as a living, continuously developing organism. He strengthened the opera troupe, radically updated the symphony orchestra, contributed to the creation of a classical ballet troupe in the theater, and made serious efforts to create its own artistic production studios in the theater.

From the very first performances, the theater under the artistic direction of Valeriy Voronin demonstrated a desire to develop its own artistic style. This style is characterized by a combination of a bright original concept, an original stage design and a careful attitude to the classics.

In 2012 Valeriy Voronin, was the initiator of the first open air performance in the history of Astrakhan: there was the folk musical drama by M. P. Mussorgsky “Boris Godunov” in the historical architectural “setting” of the Astrakhan Kremlin. The performance became the winner of the Russian professional award “The Verge of the Theater of Masses” in the nomination “The best theater in the open air”, it  was highly appreciated by critics, caused a great resonance among Russian musicians and the public.

The project “Russian Operas in the Astrakhan Kremlin” has become traditional. Besides “Boris Godunov”, the epic opera of A. Borodin “Prince Igor” was staged in 2014, in 2016 - the liturgical opera of N. Rimsky-Korsakov “The Legend and the Invisible City of Kitezh and the Maiden Fevronia”. The performance also became the winner of the Russian professional award "The Verge of the Theater of the Masses" in the nomination "The best theater in the open air”.  A musical reading of the monument of ancient Russian literature “A Word about the Battle of Igor” to music by A. Borodin was presented to the 300th anniversary of the Astrakhan province in 2017.

Large open-air projects have captured thousands of viewers, attracting not only Russian but International attention to this.

A new modern theater with its own recognizable face has developed in Astrakhan under the artistic direction of Valeriy Voronin; a theater that was loved by the audience, that attracted attention of specialists and was highly appreciated by professional critics.

Four opera performances of the theater were nominated for the National Theater Award “Golden Mask”, including the nomination “The Best Work of a Conductor”.

In 2016 the theater was awarded the title of laureate of the first National Opera Award “Onegin”.

Two performances of the project “Russian Operas in the Astrakhan Kremlin” became the winners of the Russian professional award “The Verge of the Theater of Masses” in the nomination “Best Outdoor Theater”.

Valeriy Voronin conducts serious concert activity heading the symphony orchestra of the theater. The symphony cycle “The Whole Beethoven” consisting of 7 concert programs was a significant event in the cultural life of the region.  A gala concert was given to the 200th anniversary of the great Verdi, concerts dedicated to the works of Wagner, Strauss, Mahler, Berg, Rachmaninoff, and Rossini. The numerous symphony concerts featured works of Tchaikovsky, Sviridov, Shostakovich, Dvorak, Elgar, Korngold, Debussy and many other prominent composers.

V.V. Voronin’s job as a conductor is not limited only by the Astrakhan theater. Maestro  is the Guest Conductor of the Opera and Ballet Theater “Astana Opera”, National Symphony Orchestra of the Republic of Bashkortostan. For many years he  has collaborated with St. Petersburg groups,  St. Petersburg State Academic Symphony Orchestra and the Parma Royal Theater . He also  conducted concert programs in the  various festivals with the participation of such famous musicians and vocalists as V. Repin, A. Markov, D. Shapovalov, Y. Marusin, H. Gerzmava, R. Vargas, etc.

Valeriy Voronin opened the Mediterranean festival in Calabria, Italy, where a requiem of V.A. Mozart performed by the symphonic orchestra "Della Callabria" and the choir "Coro Lirico Siciliano”.

2017 - at the invitation of the administrations of the two largest opera houses of the People's Republic of China - "Taijin" (Beijing) and "Harbin" (Harbin), the conductor took part in the Puccini International Opera Festival, where several performances of the opera La boheme by G. Puccini were held with the Parma Royal Opera Company.
2018 - took part in the Mediterranean Festival (Lamezia Terme, Italy) and in the festival "Mythical Opera" (Italy). Valery Voronin has been nominated for the Golden Mask National Theater Award several times, including the nomination “The Best Conductor's Work”.
2019 - at the Vienna Philharmonic the Wiener Moonlight Symphony Orchestra successfully performed under the direction of Valery Voronin, artistic director and chief conductor of the Astrakhan Opera and Ballet Theater.
2020 - The Astrakhan Opera and Ballet Theater Symphony Orchestra conducted by maestro Valery Voronin and pianist Vadim Palmov presented rare-sounding pieces by A. Rubinstein and G. Mahler in Astrakhan. The symphony concert was dedicated to the memory of the national artist and brilliant conductor Ravil Martynov.

In the Great Hall of the Moscow State Conservatory  named after P.I. Tchaikovsky V. Voronin conducted the vocal competitions of the “New Year's Royal Tournament” that was organized with the support of the Foundation “Talents of the World”.

Striving for constant renewal of theatrical life Valeriy Voronin initiated the creation of the “Delta-Jazz” jazz music festival, which attracted highly professional jazz musicians not only from Russia, but from the USA, Italy, and Iran.  In 2018, the Theater holds the festival for the third time.

Voronin invites not only domestic but also foreign performers to participate in shows to expend the creative geography of the theater. Under the direction of V. Voronin tours of the theater ballet troupe with a symphony orchestra to the UK, Germany and China became regular. A long trip including the cities of Great Britain was made by an opera troupe. It has also toured to the cities of the North Caucasus, Azerbaijan, Kazakhstan, and Kalmykia. The theater traveled to Krasnoyarsk on the Big Tour program and successfully showed the opera “Tosca” in Moscow at the Festival “To See Music”.

V.V. Voronin pays a lot of attention to work with the younger generation. He actively promotes the professional realization of the beginning artists and for many years supports the Russian project of the St. Petersburg House of Music “The River of Talents”. Young musicians from different cities of the country perform on the Astrakhan stage together with the theater symphony orchestra conducted by Valeriy Voronin.

The repertoire of the theater includes operas and musicals for children, theatrical concerts offer a wide range of musical educational programs for children of preschool age to high school students.

In 2016 he was awarded the medal of the Order “For services to the Astrakhan region”.