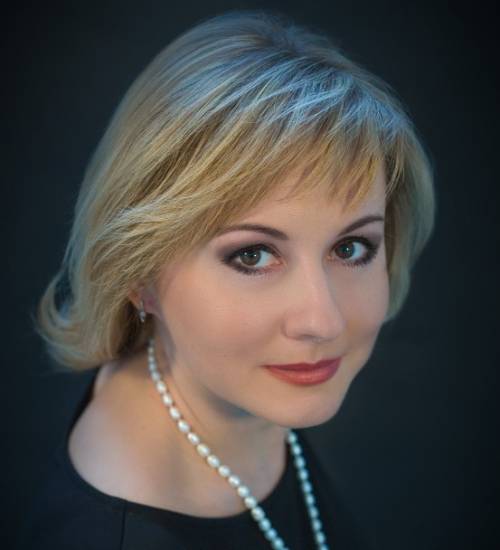 She graduated from the Cherepovets Arts and Crafts College named after V. Vereshchagin, majoring in choral conducting and the Petrozavodsk State Conservatory named after A.Glazunov, majoring in solo singing (class of Professor V. A. Volchkov).

Since 2010 - a soloist of the Astrakhan State Opera and Ballet Theatre.

From 2015 a guest soloist of the State Academic Bolshoi Theatre of Russia (d .Moskva) (Party of Mimi in the opera J. Puccini's "La Boheme" and the Party of Iolanthe in the opera P. Chaykovsokgo "Iolanta")

She has a busy concert schedule. Collaborates with "Akhmatova Museum: Silver Age" (St. Petersburg) and the Pomeranian Philharmonic (Arkhangelsk)

2003 - the I prize winner of the XI all-Russian vocal competition "Bella voce", Moscow.

2012 - a winner of the Governor's award in Vocal Arts named after M. Maksakova.

2010 - a nominee of the 17 National Theatrical Festival "the Golden Mask" in the category "the Best Female Role" (the part of Yaroslavna from "Prince Igor").

2012 - a nominee of the 18 National Theatrical Festival "the Gold Mask" in the category "the Best Female Role" (the part of CIO-CIO-San from Opera "Madame Butterfly").

2013 - a nominee of the19 the National Theatrical Festival "the Goldtn Mask" in the category "the Best Female Role" ( the part of Lisa from the Opera "the Queen of Spades").

As part of the Rostov musical theater troupe toured in the UK, Ireland, Spain, Portugal.

She performed a solo part in the 9 th Symphony by Beethoven in the National Concert Hall, Madrid.

She performed "Carmina Burana" and "Requiem" by Mozart in Barcelona Palace of music.

Yaroslavna - "Prince Igor" by A. Borodin

Fornarina - "Raphael" by A. S. Arensky

Lisa - "The Queen of Spades" by Tchaikovsky

Fevronia - "Legend of the Invisible City of Kitezh" by Rimsky-Korsakov

In 2012 she sang the part of CIO-CIO-San in "Madame Butterfly" by G. Puccini at the festival "The Golden Mask" in the Bolshoi Theatre (Moscow).

In 2013 she sang the part of Lisa in "The Queen of Spades" by P. Tchaikovsky at the festival "The Golden Mask" in the Musical Theater named after Stanislavsky and V.I.Nemirovich-Danchenko (Moscow).

In 2015, she performed the part of Tatiana in "Eugene Onegin" by P. Tchaikovsky at the festival "The Golden Mask" in the Musical theater named after K. S. Stanislavsky and V.I. Nemirovich-Danchenko (Moscow).

In Sigulda (Latvia) participated in the International Opera Festival (she sang Butterfly in the play "Madame Butterfly" J. Puccini, directed by Yuri Alexandrov).

In 2011, at the Mikhailovsky Theatre (St. Petersburg) performed the role of Nedda in the opera "Pagliacci" by R. Leoncavallo.

The 2012 and 2014. He participated in the International Festival of Vocal Arts. Barsova B. and M. Maksakova (Astrakhan).

In 2012, at the Bolshoi Theatre (Moscow) she sang Cio-Cio-San in the opera "Madame Butterfly" J. Puccini during the festival "Golden Mask".

In 2015, at the Bolshoi Theater (Moscow) performed the role of Mimi in the opera "La Boheme" J. Puccini.

In 2013, at the Musical Theater. KS Stanislavsky and Vl.I. Nemirovich-Danchenko (Moscow) has performed Lisa role in the opera "The Queen of Spades" by Tchaikovsky at the festival "Golden Mask".

In 2015, at the Musical Theater. KS Stanislavsky and Vl.I. Nemirovich-Danchenko (Moscow) Tatiana sang role in the opera "Eugene Onegin" by Tchaikovsky at the festival "Golden Mask". Since 2015 he collaborates with the museum "Anna Akhmatova. Silver Age "(St. Petersburg).

From 2015, he has been a guest soloist of the Bolshoi Theatre of Russia (Moscow).

She took part in the open air theater projects "Russian operas in the Astrakhan Kremlin": 2014 - "Prince Igor" by Alexander Borodin (Yaroslavna), 2016 - "Legend of the Invisible City of Kitezh" by Rimsky-Korsakov (Fevronia).

Since 2016 he collaborates with the Pomeranian Philharmonic (Arkhangelsk).